Not only did my team, the mighty PBS/RRR Megahurtz (a combined team of broadcasters from two of Melbourne's leading community radio stations) win a mighty victory over the villainous Espy Rockdogs (a ragtag assembly of Melbourne musicians) at St Kilda's Junction Oval on Sunday afternoon, but we raised over $165,000 for the Sacred Heart Mission in astounding display of community spirit.

In a dazzling display of courage, flair and - very occasionally - skill, we kicked our way to victory after trailing in the first half of the game. At the after party, held at the iconic Prince of Wales Hotel, the Megahurtz were again triumphant, defeating the Rockdogs twice in one day, this time in a DJ battle. On the field I was most effective as a tagger, and on the decks, paired with PBS's 'Flying' Phil Egan, we showed the Rockdogs who was boss. ;-)

I'm now stiff, sore, bruised and have discovered muscles I never knew I had, but it's all worth it. The sense of pride and achievment at the afterparty was intoxicating - a natural euphoria that came from a magnifient display of true community spirit.

What a day. What a magnificent bloody day. Congratulations to all involved.
Posted by richardwatts at 5:50 am 1 comment:

DVD Review: Panic In The Streets

Director Elia Kazan is best known for directing Marlon Brando in A Streetcar Named Desire (1951) and On The Waterfront (1954), and also for betraying many of his Hollywood colleagues to the Un-American Activities Commission. The minor film noir classic Panic In The Streets (1950) is not Kazan’s best work, but it is certainly a striking example of Cold War paranoia expressed in cinematic terms. It’s also a fast-paced crime thriller and medical drama that cleverly exploits the seedy underbelly of its striking New Orleans setting.

Richard Widmark plays against type as the heroic medical officer Dr Clinton Reed, a struggling family man trying to make ends meet, who is suddenly called upon to prevent an outbreak of pneumonic plague (a highly contagious variant of bubonic plague). As well as battling cynical and suspicious city officials, he is pitted against the villainous and reptilian Blackie; a murderous minor gangster played with sinister flair by a young Jack Palance in his screen debut. The screenplay by Daniel Fuchs and Richard Murphy personalises the danger of a fatal epidemic in New Orleans by counterpointing Dr Reed’s home life with the his increasingly desperate quest, while Blackie’s own search for the plague carrier provides a parallel plot which, in classic noir style, is a distorted reflection of the central story.

The plot device of a disease that can threaten an entire nation if not checked within its 48-hour incubation period is an obvious metaphor for communism, and perhaps in part because of this simplistic aspect of the screenplay, the film begins to run out of steam in its later scenes. Despite this flaw, Panic In The Streets is a strong and enjoyable film. The performances of all the leads are engrossing, particularly Palance’s Blackie, a man who is cruel enough to throw a dying man down a flight of stairs in order to aid his own escape. Joseph MacDonald’s cinematography is fluid and innovative, as is the soundtrack, opening with Billie Holiday and creating an air of verisimilitude by featuring fragments of conversations and snatches of sound to underscore the action. Dr Reed’s desperate bid to prevent an epidemic takes him into underworld dens and waterfront slums, locations that are filmed with documentary-like flair and which go a long way towards creating the menacing atmosphere that permeates this movie.

The film transfer is crisp, with strong contrast and a clear image. Unfortunately it is not presented in letterbox format, which impacts on the bravura cinematography. Most frustrating for film buffs is the absence of the commentary by film noir historians Alain Silver and James Ursini that is found on the Region One version of Panic In The Streets. The only extras provided locally are a pointless photo gallery and the original cinematic trailer, marring an otherwise strong DVD release.

RICHARD WATTS
Posted by richardwatts at 10:19 am No comments: 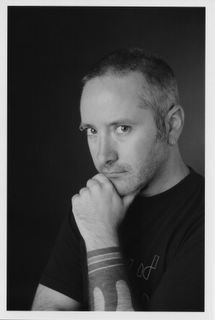 Posted by richardwatts at 3:23 pm 3 comments:

Gothic Realism: Moira Finucane talks about the power of the dark side

Moira Finucane credits a Catholic upbringing for her fascination with the macabre. "The lives of the saints are so much about pain and suffering, redemption and hope and glory," she laughs wickedly. "Being a very imaginative child, I guess I was always really fascinated by the intense morality of religion. The guilt and the blood, they’re very strong images."

Finucane, described by The Age as "less an actor and more a force of nature" is a Melbourne-based performance artist whose intense and provocative stage presence has won national acclaim. In her latest production Gotharama, directed by long-term collaborator Jackie Smith (herself the winner of the 2001 Patrick White Playwright Award), Finucane fuses Catholic imagery with the transcendent possibilities of fairytales to create a world simultaneously nightmarish and beautiful. Despite its macabre qualities, she hopes it is a world the audience will willing enter.

"All of my work at its bedrock is about gender, violence, power and desire, but it’s kind of filtered through a whole lot of populist artforms that I’ve always loved: vaudeville, burlesque, silent movies, music hall." Finucane explains. "I love those artforms, and the way they privilege the audience experience. I guess the audience is kind of central to Jackie’s and my work together. We like to create intimate theatrical spectacles that the audience can inhabit. It’s not just about them sitting there in the dark."

As a performer, Moira Finucane is no stranger to the dark side. 2001’s Phantasmagoria saw her present the story of a lone woman on a steam-train hurtling through the night, pursued by her thirty red-haired, yellowed-eyed relatives, while for Chunky Move’s Arcade that same year she and Jackie Smith devised The Dress Shop, a tale of Victorian seamstresses whose stitches gave birth to a monster made of black lace.

Such macabre themes may not to be to everybody’s tastes, but Finucane clearly revels in them. "I guess why I find that kind of stuff fascinating is because it deals with very deep-seated fears, with cultural archetypes as well as really fundamental morality," she says. "Horror is often very misogynistic but it can also be a lot of fun, you know?"

The seasoned performer is looking forward to the opportunity Gotharama offers to present her more text-based works, which she has had few opportunities to explore in recent years save for in the intimate setting of the Word Is Out spoken word series. She is also enthusiastic about the production’s soundscape. "It’s the first time I’ve worked with a live musician, which is very exciting, and we’re using everything from classical music to hardcore industrial."

This cross-cultural fusion extends to the overall feel of the production. "We’ve got the exciting supernatural qualities of the bodice-ripper and the Victorian fascination with ectoplasm and mediums, though to a contemporary understanding of the gothic, things like Nosferatu, modern Japanese horror and magic realism. And there’ll be blood," Finucane promises. "A lot of blood."

Hailing from Austin, Texas, the duo known as Spoon created deft but unremarkable indie albums for several years. Their breakthrough came with the sparse yet rich Kill The Moonlight in 2002, and now on their fifth studio album the band has created a real masterpiece. Gimme Fiction combines solid, beefy guitar rock and choppy, eclectic creativity. Rhythms slide to the edge of chaos before darting back to their original tempo; obscure samples and musical fragments weave in and out of warmly produced songs; tunes zigzag unexpectedly. From the minimal, Jagger-esque swagger of ‘I Turn My Camera On’, to the darker, driving ‘The Infinite Pet’, Gimme Fiction has a breathtaking diversity that doesn’t so much hang together, as squeeze together in a rib-crushing embrace that leaves you breathless.

The first studio album from Irish quartet The Frames in four years is a slow-burning, evocative collection of beautifully tortured songs which begin by being understated and slowly swell into luscious, menacing melodrama. Strings add tension and power to the opening track ‘Happy’ while ‘Finally’ starts out bruised and ends up spitting and snarling. On ‘The Ship In The Bay’ subdued electronica underscores the band’s melodic pop-rock while vocalist Glen Hansard whispers that "We’ll make the fuckers pay," and the fragile, thunderous ‘Keepsake’ is enriched by a yearning, evocative fiddle. There’s an undercurrent of restrained venom running through this album which suggests that The Frames almost regret being named the best Irish band of 2004, but judging by Burn The Maps they indubitably deserve the acclaim.

Sleater Kinney achieve a fusion of passion, fury and brilliance on their new CD which suggests that the feisty female trio have reached their apogee. The Woods is not a comfortable album, but its bass-heavy sound, sonic shocks and caustic lyrics truly make for rewarding listening. At a time when ‘alternative’ has become a soulless marketing phrase, Sleater Kinney have a sound and a spirit to gladden your heart. As they sing on one of the stand out tracks on this album: "If you’re here cause you want to be entertained/Please go away." The Woods is an album that proves some bands still possess the ability to make you think even as they make you feel desperately, gloriously, feverishly alive.

pep-sic-oke, the debut release from Melbourne band Thylacine, is a mesmerising blend of seriously stylish ambient electronica, jazz, dub and static-fuelled trip-hop. This album reveals a love for the spirit of improvisation coupled with bullshit detectors turned up to 11, for there is no meandering self-indulgence here, only passionate, intricate and innovative tunes that are truly deserving of a wider audience. I suspect you’ll only find this album in independent music outlets such as Raoul Records or Polyester; alternately you can e-mail the band directly at info@thylacine.org to get your hands on a copy.
Posted by richardwatts at 11:55 pm No comments: